April Fool's Day is a day of trickery, traditionally devoted to "trickster spirits" like Loki in Scandinavian folklore, for example. An entire day filled with tricks and pranks to satisfy the child within us all but to also appease the trickster spirit that lurks behind the doors, ready to trip us up at first chance!

In Pennsylvania Dutch folklore, we have a trickster character that goes by the name of Eileschpiggel. Eileschpiggel is often seen as either a young man or a spry older Pennsylvania "Dutchy" man who delights in tricking that one character we'd all love to steer clear of.... the Devil himself.. 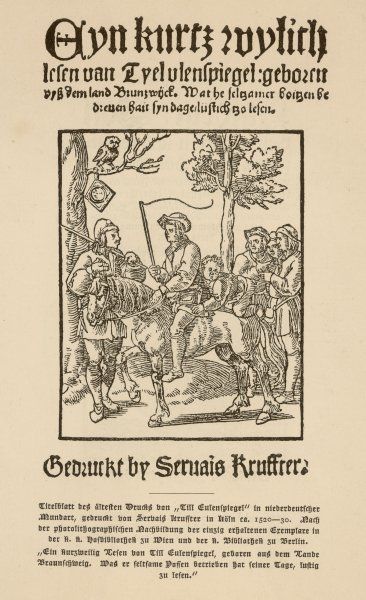 Eileschpiggel is a brave soul, and not afraid to take chances. He loves nothing more than to make a fool of the 'ole Devil and show him up every chance he gets.

The following is an excerpt from Folk Religion of the Pennsylvania Dutch by Richard Orth:

One day Eileschpiggel and the Devil were talking, and the Devil baosted of how hot it was in Hell. Eileschpiggel retorted to the Devil that the hotter it was, the better he liked it. The Devil then made a challenge with Eileschpiggel to see which one of them could stand heat the best. The challenge was accepted, adn the two of them went off to a nearby bakeoven. They fired the bakeoven, and then both of them crawled inside. After a very short while, Eileschpiggel feared that he would soon burn up, and he started to crawl out the door. The Devil yelled at him, "Where are you going?" Eileschpiggel replied, "It's too cold in here, I am going to put more wood on the fire!" At that instant, the Devil quickly followed him out and said, "You win, you can stand the heat better than I can."

In another wager, the Devil challenged Eileschpiggel to a swimming match to see who could swim the farthest. They decided to meet at the Schuylkill River; the Devil showed up on time, but youn Eileschpiggel was late. When the Devil was just about to go look for him, he saw Eileschpiggel coming down the dirt road dragging a calf. As he got closer he said to the Devil, "Go get some wood for a fire." The Devil, Puzzled, asked "Why?" Smart Eileschpiggel then replied, "You don't expect me to swim for forty days and nights without first having a good meal!" With that reply, the Devil considered Eileschpiggel the better swimmer without even getting in the water.

This April Fool's Day, raise a glass to the cleverness of our own Pennsylvania Dutch trickster, Eileschpiggel!